Where Have All the Flower Shops Gone?

According to a recent report by the Society of American Florists, retail floral establishments fell to record lows in 2009, per data just released from the U.S. Census Bureau. The number of florists has fallen 34 percent since 1997 when the drop began, with a total of 9,381 retail florist businesses having vanished since 1997. The number of shops increased in only four states from 2008 to 2009: Wyoming, Hawaii, South Dakota and Nebraska.

Staffing also fell at retail florist shops, with 68% of all shops having 1-4 people, just under a quarter employed 5-9 people and only 9 percent of all shops had 10 or more staff members.

Waukesha Floral employs an average of 20 full and part time people per year, including those at Planteriors of Wisconsin, the plant rental and maintenance division.

Thank you for thinking globally, but shopping locally. Waukesha Floral hopes to continue its 107 year tradition of beautiful flowers and plants both now and well into the future. 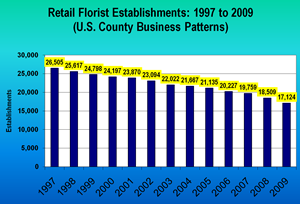 This article was written by imaadmin